Peter Spengemann
Ulrich Wolter
wpd_Windpark_Kyritz
Peter Spengemann
Geschäftsführer Repowering
wpd windmanager GmbH & Co. KG
Repowering has the potential to preserve wind sites and multiply output. The trend is increasing. But what do you have to consider when repowering? Read it in this article.

Repowering of existing projects is not as developed in any other market as in Germany. This is due to the age of many existing wind farms due well as to the political and planning framework. The trend is rising, especially in Germany. There, repowering accounted for 13 to 25 percent of the annual wind energy additions in the past 5 years.

One can assume that repowering is also gaining in importance in other markets. Drivers are, on the one hand, the number of projects with an age of 15 years and more, and on the other hand, a scarce area for new projects and the corresponding framework conditions for wind energy. In view of the current political pressure, however, it is already clear that repowering is increasingly implemented in other countries as well, and in some countries the legal and regulatory framework for this has already been created.

From the operator’s perspective nearly all repowering projects have in common that the repowering was accompanied by a significant increase in yield. Here, the installed rated output is less relevant than the achievable energy yield in MWh/a. 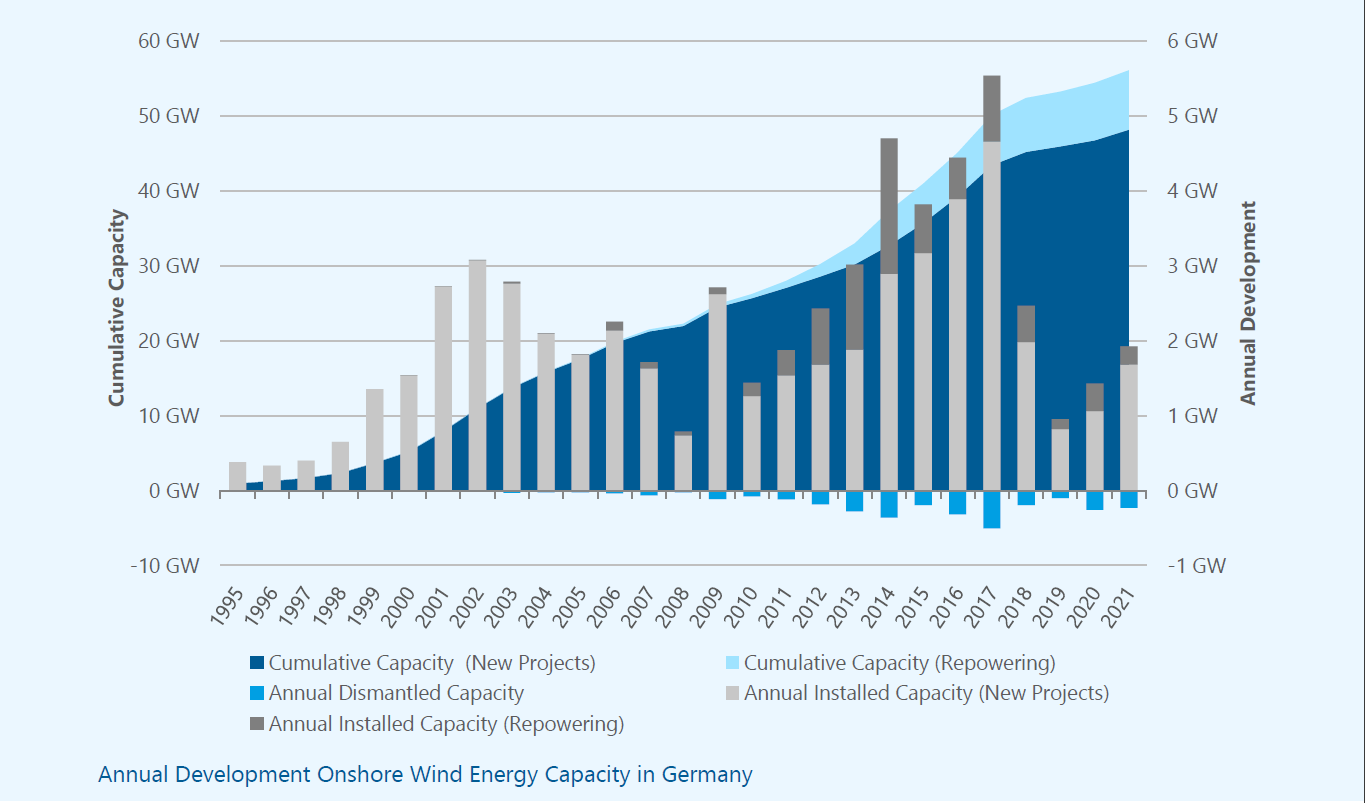 The share of repowering in new installations is growing steadily in Germany. © Deutsche WindGuard

What all projects in Germany have in common is that – even though turbines are already installed and rotating at the site – a completely new approval process had to be initiated. In general, even if there are political efforts for simplification or a "fast track" approval (currently available as an option in France), the repowering project corresponds in almost all parts to a new project in terms of planning, approval, time and financing.

There are, a number of points that need to be taken into account in the repowering process, which will be discussed here.

1) When do the plans for a repowering start?

The existing turbines and the site specific conditions define the repowering potential. It has shown to be useful to first roughly evaluate the existing projects about the probability of realization and to only start concrete planning if there is a high probability of implementation. Such analyses are part of the respective operational management, regardless of who plans and implements repowering at the end.

A good recommendation is to examine the projects already after 15 years and to decide promptly whether repowering planning should be initiated or not. By the way, this requires a decision by the wind farm operator, because in almost all cases he has secured the site for a longer period with the current project, and he is generally in a position to finance the initial planning up to the approval from the current operation.

Whether the project can then be successfully implemented or whether a wind farm will be repowered, for example, in operating year 18 or later in operating year 25, cannot be reliably predicted at this point. This must be decided on a case-by-case basis. Either way, it is not recommended to deal with the issue of repowering just at the end of the operating period. 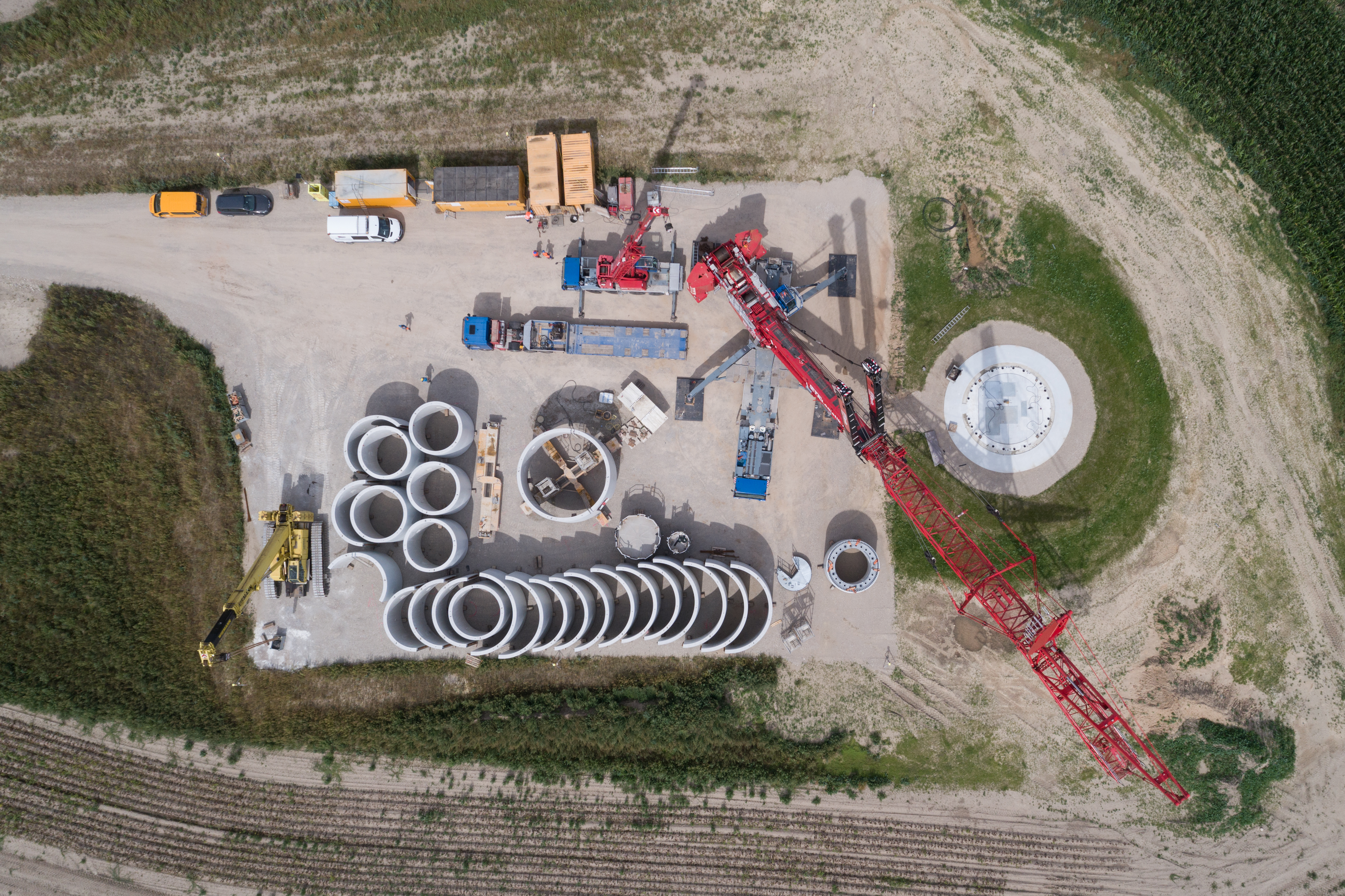 The scope of a repowering is comparable to the planning of a new project. © Ulrich Walter

2) How should the relationship between continued operation and repowering be evaluated?

Both repowering and continued operation are subject to uncertainties. Although electricity prices are currently (1st quarter 2022) extremely high and support continued operation, this can also change again soon and could jeopardize the economic viability of continued operation if operating costs rise. The fact is both options need to be discussed. At the latest before major costs arise, it must be clearly determined whether repowering or continued operation is the more reasonable option. Often it is also a combination of both, where individual turbines can continue to be operated and others are repowered. This must be decided in each case individually.

3) What advantages do I have based on the existing wind farm?

The potential cost advantage due to already existing turbines is generally to be rated as low. Although parts of the existing infrastructure can possibly be used further this is usually opposed by the not inconsiderable cost of dismantling the old turbines. Not to be underestimated, is the exact knowledge of the site based on the operating data of the current project over a very long period of time. The value of the information on the expected energy yield for the new project is significantly higher than for comparable planning on a "greenfield" site. This can also be clearly seen in the performance of the operating repowering projects.

4) How do I coordinate the dismantling of the old facilities?

The dismantling of the old wind turbines goes hand in hand with the implementation of the construction project for the new project. It is necessary to coordinate construction schedules, infrastructure planning between the deconstruction and the new construction, and also to take advantage of synergy effects that may exist here in some cases. In general, if the old facilities at the site are still in good operating condition, it is also possible to sell them. Often old plants are sold and rebuilt abroad (mostly in Eastern Europe).

5) How is the general performance of the already repowered projects?

In total (as of March 2022), wpd have successfully repowered 16 projects. Another 3 are currently in the approval process or are in construction readiness. Like mentioned before, almost all projects have in common that the forecast yield calculations are being met. The data situation for current projects is so good that very little uncertainty can be expected for the new project. This is an advantage that has also been confirmed by the banks in the context of project financing.

A look into practice: What can we achieve through repowering?

In 2013, the Hasenkrug-Hardebek project (Schleswig- Holstein, Germany) with 12 existing NEG Micon NM60/1000 turbines was replaced by 12 new Enercon E-82 turbines. The old wind farm was already repowered before the end of the term, as the old turbines – mainly due to the location and the low hub height – were running significantly below expectations. Due to the high forecast quality and the good performance, it was possible to generate significantly more payout after commissioning than the continued operation of the existing WTGs. The necessary equity capital was almost completely provided by the ongoing operation of the old project. The old turbines were successfully sold to other Eastern European countries and will continue to be operated there. In terms of energy yield, the WTGs generate about 53 GWh/a, 70 % more than the old project.

Another example for a repowering project is the Kyritz wind farm (Brandenburg, Germany) in 2018. Again, NEG Micon of the 1 MW class were replaced, but only 6 out of 17 existing turbines at the site. Here, 6 new Nordex N117 turbines with high hub heights were installed. The performance of this new project fully meets the expectations of the complete wind farm. The still running turbines (11 WTG) are currently scheduled to be repowered in 2024.

In 2021, the Gerbstedt wind farm (Saxony-Anhalt, Germany) was put into operation. A total of 9 GE 1.5s wind turbines were replaced by 8 Vestas V126 wind turbines. Due to the length of the planning, the development costs were higher than assumed, but now the operators have a new project, which – according to the current status – is obviously well above the assumptions of the financing. 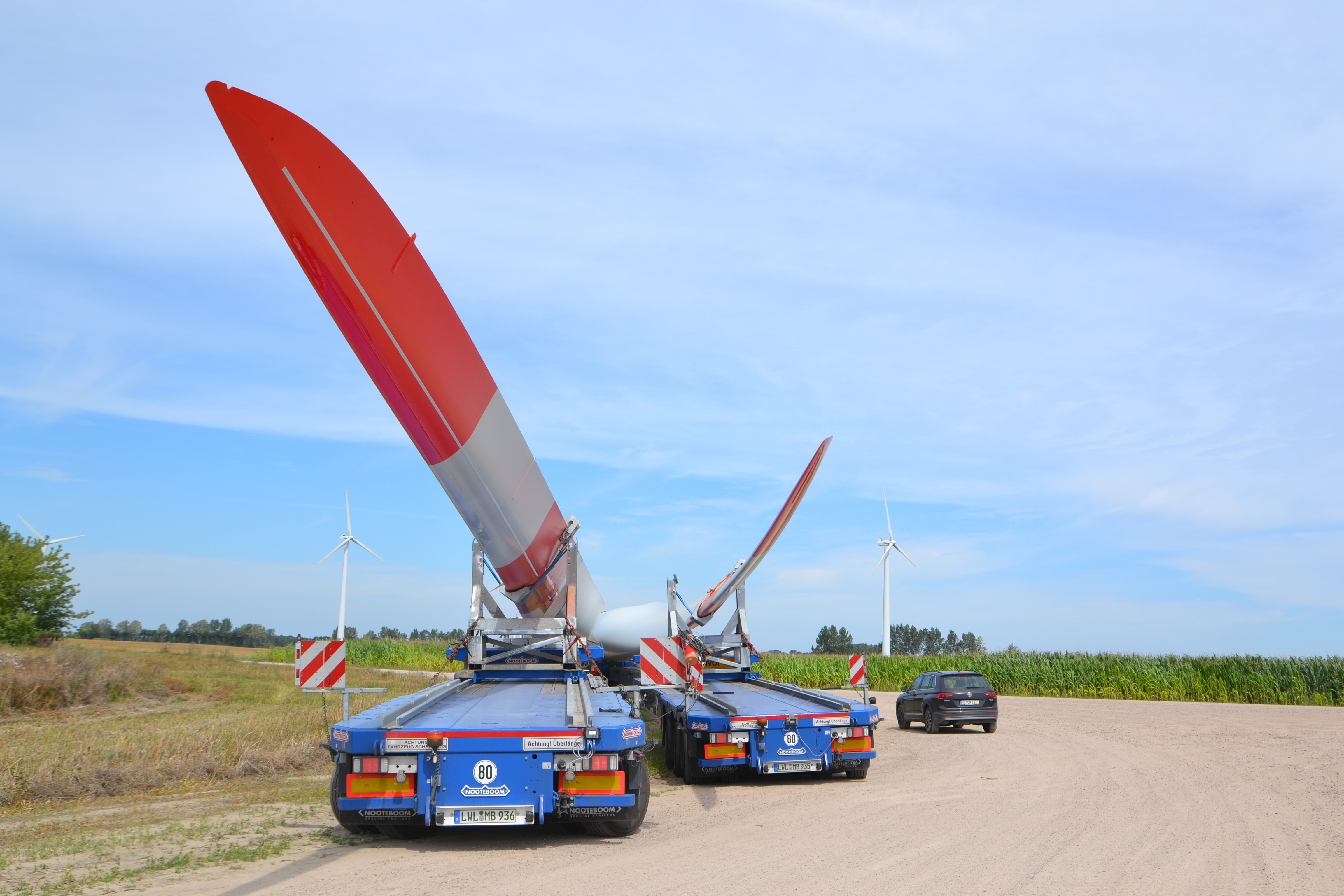 It is important to coordinate deconstruction andnew construction to use synergy effects. © wpd

A repowering corresponds to a new project in terms of costs and the planning effort. Country specific exceptions excluded, it is characterized by the dismantling of the old turbines and the construction of new ones. Due to the use of modern turbines and higher hub heights, repowering is a reasonable and comprehensible alternative to continued operation.

It is recommended to start planning for repowering in time and to structure and organize the repowering project in cooperation with the operators of the old wind farm. In this context, current contracts, the ownership structure, etc. must be considered.

The operating data of the running old project allow a very high information quality for the new project. The German market clearly shows that repowering projects are evaluated much more realistically in terms of revenue assumptions than comparatively greenfield projects. In general, only those projects are repowered for which a sufficient wind potential in hub height can be derived.

Depending on the location and planning conditions, it must be decided in good time whether repowering is desired or not. This requires appropriate analyses and feasibility assessments and also the consent of the operators of the current wind farm.

It is well known that, depending on the market, different framework conditions prevail for wind energy in general and for repowering in particular. The fact is, however, that in order to achieve the climate policy goals, repowering must also be made possible – depending on the age of the projects already underway. So, it is only a matter of time that we will see repowering projects increasingly in many other European markets as well.

This article is part of the "German Wind Power Magazine", issue 01-2022. You can read the full magazine here for free.